Introducing the New Director of Campus and Outreach Ministries

July 3, 2019
Dean Sarah Drummond is pleased to announce the appointment of Ms. Emily Bruce in a newly-created position at Andover Newton Seminary at Yale Divinity School: Director of Campus and Outreach Ministries. This two-year postgraduate fellowship is one Ms. Bruce will carry out in tandem with an internship in a Unitarian Universalist congregation, First Parish in Sherborn, Massachusetts under the supervision of Andover Newton Fellow the Rev. Nathan Detering. 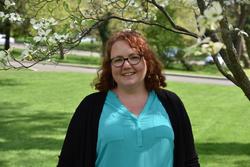 Ms. Bruce earned her M.Div. from Yale Divinity School in May of this year and has the distinction of being the first graduate of Andover Newton Seminary’s diploma program. She is a native of New Orleans, LA and spent her childhood in the Episcopal Church. Upon receiving her BA in Theatre from Florida State University, she stepped away from both the church and the South and moved to New York City, spending the next thirteen years working her way up the ladder of the theatre industry. After eight years as the Associate General Manager for New York’s renowned Public Theatre, Ms. Bruce reports, “It became impossible to ignore that still small voice in my heart that was calling me to something more.” Ms. Bruce followed that calling to Rhode Island, where she joined a Unitarian-Universalist community and served as an educational administrator in the theater department at Brown University.
Dean Drummond reports that she and her Andover Newton colleagues selected Ms. Bruce for this role because of Ms. Bruce’s proven gifts in campus religious life during her studies, as well as her prior experience in higher education administration. Ms. Bruce’s responsibilities will include supporting all non-academic Andover Newton community life in partnership with the Andover Newton staff and affiliated faculty. Ms. Bruce will also plan and carry out events that connect Andover Newton at YDS with alumni/ae, churches, and the New Haven community.
Ms. Bruce and her new Andover Newton colleagues are all overjoyed at her appointment to this new role. According to Dean Drummond, “When people at YDS talk about Andover Newton, the first thing they mention is its sense of community. Emily’s appointment acknowledges the value Andover Newton places on building community and will cause that community to flourish even more.”