January 15, 2019
Martin Copenhaver, who has served as president of Andover Newton Theological School since 2014, today made public his plans to retire from that position on June 30, 2019.
Linda Campanella, chair of Andover Newton’s board of trustees, and Greg Sterling, dean of Yale Divinity School (YDS), announced jointly today that Sarah B. Drummond has been selected to succeed Copenhaver as chief executive of Andover Newton.
Copenhaver presided over the process that led to Andover Newton’s move from Massachusetts to Connecticut and consummation of an affiliation agreement with Yale Divinity School in 2017. Drummond, who has served as Andover Newton’s chief academic officer since 2011, came to YDS as one of the five members of the Andover Newton faculty participating in the 2016-17 “visiting year” that preceded affiliation. She subsequently led the process of developing an innovative diploma program and building a new expression of Andover Newton as an embedded seminary at YDS. She will be Andover Newton Seminary’s founding dean and the first woman to lead Andover Newton in its 212-year history.
“I am eager to bring my knowledge of administration to a time in Andover Newton’s arc of change when we need to anchor the Seminary in a new setting and culture,” said Drummond at a gathering on campus where her promotion to Andover Newton’s leadership role was announced. She added, “I have dedicated my career to Andover Newton and look forward to furthering the incredibly strong start we have made in our new YDS home under Martin’s leadership. Our board is strong, our students simply amazing, and our potential to contribute new knowledge to the world immense. I could not be more excited about what the future holds.”
According to Board Chair Campanella, “Sarah is a collaborative and creative leader who cherishes the history of our school, understands its culture, and is committed to sustaining its unique mission and identity within a much larger organization even while building something radically new. The board is confident there is no one more qualified or ready than Sarah to lead the way forward and seize the extraordinary opportunities a transplanted Andover Newton faces in its new setting.”
As dean of Andover Newton Seminary, Drummond will lead the school into the future, serving as its chief executive and its academic leader. Reporting jointly to the Andover Newton board and the YDS dean, she will be responsible for fulfilling Andover Newton’s vision of being recognized as a thought leader and the preeminent seminary for the education of church leaders in the congregational traditions. In addition to her administrative duties as the dean, she also will have a teaching role as professor of ministerial leadership.
YDS Dean Greg Sterling expressed his enthusiastic support for Drummond: “Sarah brings a unique combination of a Yale pedigree, thorough knowledge of Andover Newton, and leadership in theological education. She was intimately involved in the process of Andover Newton’s transition from Newton Centre to New Haven. She has led the successful formation of the Andover Newton program at YDS. The bright prospects for the future of the new program are enhanced by Sarah’s appointment. There is simply no one who is better positioned to lead Andover Newton.”
In reflecting on the future of Andover Newton under Drummond’s leadership, Sterling also reflected, with gratitude, on the leadership of the person she will succeed: “Martin Copenhaver is a visionary and courageous leader who not only forged a path to a bright future that would sustain and even strengthen Andover Newton’s historic mission, but also established a model for other schools around the country. I do not have adequate words to express my appreciation for and admiration of Martin.” 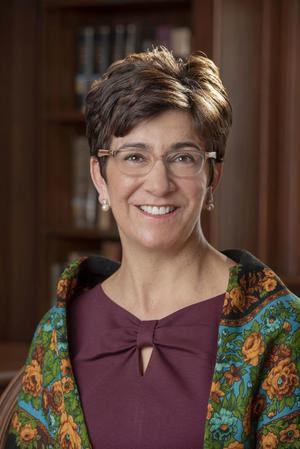 In the period ahead, Drummond will also will fill the role of president of Andover Newton Theological School and be responsible for fulfilling all remaining legal and fiscal responsibilities associated with Andover Newton’s status as a legal entity in Massachusetts; that entity will be dissolved when Andover Newton and YDS make their affiliation agreement permanent, a move scheduled to take place in 2022.
Following his retirement from the leadership role at Andover Newton in June, Copenhaver will serve on a part-time basis as Senior Fellow, reporting to Drummond and focusing on implementing key strategic initiatives and nurturing important external relationships for Andover Newton.
“Sarah Drummond has a stunning constellation of gifts,” said Copenhaver about his colleague and successor. “She has a passion for the church and for preparing the church’s future leaders.  She is what we want our graduates to become—bold, creative, grounded, irrepressible, faithful, and fun. She was created for this work, was called by God to this work—and, gratefully, is now being called by Andover Newton to lead us in a new and enlarged capacity.”
Drummond began her service to Andover Newton in 2005, teaching courses on ministry and directing Andover Newton’s historic field education program. She is the author of three books; her latest – Dynamic Discernment: Reason, Emotion, and Power in Change Leadership (The Pilgrim Press, 2019) – presents a theory of change specific to her faith tradition, the United Church of Christ, in which she has been an ordained minister since 1997. In addition to service to Andover Newton and YDS, Drummond is a member of the Association of Theological School’s Board of Commissioners, where she also serves on several committees focused on the future of theological education.
She is a graduate of Yale College and earned her Master of Divinity degree at Harvard Divinity School. After graduating, she served Harvard as both assistant dean of freshmen and chaplain for religious education at Memorial Church in Harvard Yard. She then was called as executive director and campus minister for University Christian Ministries at the University of Wisconsin–Milwaukee, where she also later earned her Ph.D. in urban education.