On Saturday, November 23rd, Prof. S. Mark Heim will receive the 2019 Frederick Streng Book Award for excellence in Buddhist-Christian Studies for his book Crucified Wisdom: Theological Reflection on Christ and the Bodhisattva. 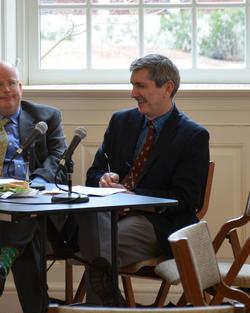 The award will be presented by the Society for Buddhist Christian Studies during the American Academy of Religion meetings.

“The son of a Lutheran minister, Fred Streng opted to attend University of Chicago, receiving Bachelor of Divinity and Ph.D. in the History of Religions, with a dissertation on Nagarjuna’s understanding of emptiness. He later taught at Southern Methodist University and became noted scholar in Buddhist-Christian studies.
“Fred Streng was one of the founding members of the Society.  He died in 1993 while serving as its third president.  See memoriam here.  As David Chappell said of him there:  “What is the sound of liberating truth?” This question was presented by Fred as his life’s koan in his Presidential Address at the Fourth International Buddhist-Christian Conference in August, 1992. Although granting that others might offer many different answers, it is revealing that the place where he found the sound of liberating truth was in “mutual transformation.” Three primary areas where mutual transformation offered liberating truth for Fred were in the internal and external pluralism found in Buddhist-Christian dialogue, second in the dialogue between the personal commitments of religion and the objectivity of academic-scientific studies, and lastly in the encounter between religion and the various physical and human problems of our global community.”