Sarah B. Drummond’s Inaugural Address: “In Defense of Seasons”

In Defense of Seasons

Good afternoon. As I look out at this assembly, I see people I love who have surrounded me with 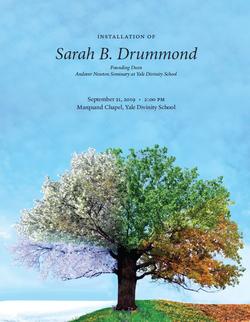 support and care through all the seasons of my life. I see my family of origin, and the cherished family I’ve built; my friends from different times in my life, including my bright college years; colleagues from many settings of ministry, past and present; and I see students – so many students – who remind me what this is all about. Thank you all for being here.
There are so many people to acknowledge for putting this day of festivities together. Allow me to single one out: my colleague Ned Parker, who chaired the committee that planned this event with both meticulousness and creativity. We’ve been through a lot together, my brother; your work, and your very being, are a gift to the school we love. Thank you, Ned.
The theme for this service is seasons, with a special shout-out to the magic month of September. You might wonder, Why September, besides the date on the calendar? The answer is renewal. Whereas secular culture celebrates the new year on January one, accountants mark it on July one, and Christians say it’s the first Sunday of Advent, educators look to September as the start of all things new. This month is our happy new year, and this service marks a new beginning. You also might wonder, Why the theme of seasons? That question will require more attention.
About ten years ago, a blizzard hit New England at the end of October. Arborgeddon, as the storm was later dubbed, was particularly devastating because of the damage it did to trees. Since they still have too many leaves on them in October to withstand the weight of snow, trees fell on houses, cars, and roads. Connecticut was hit hardest, probably because Nutmeggers like their trees more than their power lines. My parents lost electricity for 10 days, and my sister for almost three weeks. We had somewhat less damage in Massachusetts, but still, we lost some beautiful trees.
As the winter of Arborgeddon began to subside, I collaborated with the dean of our chapel in Newton, Mary Luti, on our school’s Ash Wednesday service. We asked students to gather sticks from the grounds of our campus and organized the service as a memorial to the trees that had died. I still have one of those sticks, as we handed them out with a blessing as we imposed ashes on foreheads: dust you are, and to dust you shall return.
The illustration I used in my sermon that day came from a visit my husband Dan and I took to my home town of Suffield, CT the Thanksgiving after Arborgeddon. We’d gone to a park where I’d spent time in my childhood and found that dozens of gigantic trees had fallen, their root balls a story high in the air. Many other trees were damaged but alive. We could tell which trees were living and dead by their leaves. If the colors were the ones associated with mid-fall, the tree was frozen in time; dead. If the tree was bare, it was alive, having responded to nature’s call to change seasons. A tree’s capacity to honor seasons is essential to its being alive.
As many of you know, our family lost my father this past February. He’d been declining in health slowly, and then all-of-a-sudden, over the course of about five years. My mother took wonderful care of him, but his illness took a toll on her health, most notably in the form of a bad back made worse by the literal heavy lifting of eldercare.
In August, my mother went under the knife and got some hardware to shore up her spine. After her surgery was over, my sister Wendy and I were allowed a few minutes with her in the recovery room, but then we waited several more hours. She was slow coming out of the anesthesia, and where Wendy was staying overnight at the hospital, God bless her, I’d planned to go home to sleep. I imposed on the recovery room staff for one more visit before leaving for the evening.
I was only allowed a few minutes, during which time my mother told me a story that she now doesn’t remember telling, high as a kite as she was (don’t worry; she knows I’m sharing this). My mother told me she went to visit my father’s grave the day before her surgery. She stood at his graveside and talked to him about what was about to happen. Then she got in her car, closed the door, and screamed. She screamed in anger that he’s gone, screamed because she’d lost some of her own health while caring for him, and screamed over her pain in body and spirit since his departure from this life.
After some serious and lengthy screaming, she felt better. She turned the engine over and proceeded to drive home, waving pleasantly and the other visitors at the cemetery, wondering blithely what they’d heard, and how they’d made sense of it. From her haze, my mother told me she could, at that moment, feel a new season begin. Together, we agreed, through our tears, that seasons are good. The only proof we need of Christ’s resurrection is the way resurrection happens during our lives, again and again. 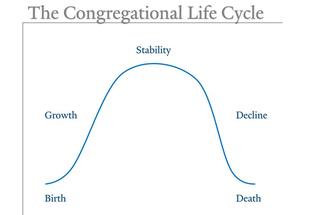 “Congregational Studies” is an area of inquiry about which I know little but have many thoughts; I know what you’re thinking: typical Yalie. Those who study congregations generally agree that churches, like people, have life cycles. They’re born, develop, and grow. Then they stabilize and decline in a cycle that lasts about three generations. Here in New England, we know that churches often last much longer than the 75 or so years that would constitute three generations. Many of our churches are pushing 350 and going strong. 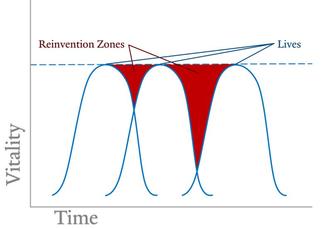 Let’s look again at these life-cycle curves, especially the red space. That space is where I propose we need to become obsessed with mission. It’s the mission that guides us from the downward slope, into a time of discernment, and back into a period of new life and growth. If we discover our mission is no longer relevant, we should allow nature to take its course. But if the mission still matters, our call – from which we can’t turn away – is to rebuild. The red space also shows us the peril of waiting too long; we want less red before reinvention, in order that we might have conserved the energy needed for change.
The ultimate reinvention for the sake of mission was the resurrection of our Lord Jesus Christ. God sent Jesus among us to teach us that God wants us to love. That truth was too strong to die. The love of Jesus overcame the power of the state, the scorn of Jesus’ own people, and even the forces of death. Mini-resurrections, like the ones that happened to Jairus’ daughter, and Lazarus, and my mother, and every person in this chapel and watching this service online? Their very possibility came into the world through Jesus’ triumph over the grave.
In the case of Andover Newton Seminary at Yale Divinity School: the education of ministers is so important our school doesn’t have time to die. We’ll have our ups and downs, our black and blue bruises, but today we remember that our seasons haven’t been harbingers of death, but reminders we’re alive.
In a few minutes, I’ll be installed into a four-point call. I’ll have my ordained standing in a network of relationships that includes the United Church of Christ, my local church, Andover Newton Seminary at Yale Divinity School, and me. All have a stake in the upholding of Andover Newton’s historic mission of providing a learned clergy to renew society. This is my calling, to which I couldn’t say no if I wanted to, and to which I offer my heartfelt yes. Andover Newton Trustees, Dean Sterling, and this gathered community: thank you for this opportunity. I’ll give it all I have and all I am, with God’s help. Thanks be to God, and Amen.