Underneath her old cowboy hat and red bandana–vain attempts to protect her skin from the Arizona sun–Laurel wears a shirt with an image of a hummingbird and the words “migrar es amar” written across it. To migrate is to love, it tells us. The hummingbird, known as the colobrí in Spanish, are considered messengers between worlds. They are known to send messages of love and joy to those they encounter.
To understand this desert, one has to learn a dance. The magnificence of the desert—its rolling hills and jutting plateaus and its surprisingly rich vegetation—has to be observed in between moments of careful stepping through brush and over rocks. We look up, gawking at the big sky, only to be forced to look down again as we try to avoid stepping on bits of cacti which attach to our clothing or skin. The thorns cling to us like they haven’t seen humans in years. To walk through the desert requires attention. Step, look, step, gaze, gawk, hop, feel the wind, avoid the hole–repeat. 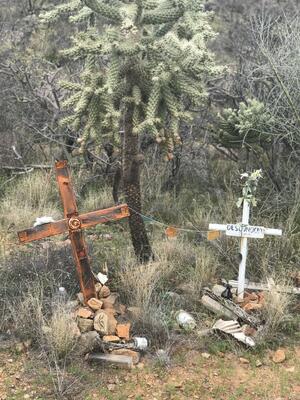 Laurel leads us through her backyard and across the plateau, stopping at the sites of three migrant memorials. We lay flowers at the base of each cross planted where bones had been found. Engraved on each cross is the word desconocido–or ‘unknown.’ Each life ended in anonymity–swallowed up by the great desert, known only by her. We pay our respects at each site: holding a small ceremony of song, poetry, and prayer. We send prayers out from our hearts, into the desert, and upwards towards a silent horizon.
At each site, we join Laurel in her tradition of yelling Presente! This means “present” in Spanish, a small attempt to recognize the dead—to resurrect the memory of those who are swallowed up by deserts and rendered invisible. Who are the desert’s desconocido? Maybe the colobrí know when they hover over the flowers we laid at the cross. Maybe the answer lies in the tattered backpacks hanging from the mesquite trees or in the tears of Laurel, when she sings to us, “Now your bones are part of the story / Part of the architecture of this landscape.”[1]
To walk through the desert, to learn the stories of the desconocido, one must pay attention. To pay attention is to know that the desert’s past is intricately connected to its future. Crucial to its structural integrity is its inherent contradiction: beauty and sorrow, death and renewal, pain and solace. To pay attention is to know this. To pay attention is to love.
I can’t help but find that the same principles that sustain the vitality of the desert are the same principles that sustain the Christian faith. John 3:16 tells us “For God so loved the world, that God gave God’s only Child, so that everyone who believes in that Child may not perish but may have eternal life.” Christ is God’s attention to creation. Love resurrects the desconocido; ushering all of creation into eternity. Redeeming our sorrows and promising renewal. Our prayers at the cross are the colobrís of the Christian faith. As our words ring out into the silent horizon, we remind ourselves of the true names of the desconocido, of all of us: God’s beloved children. ________________________________________
[1] For You Who Came This Way & Farther, Marie Vogl Gery (2009).
For an introduction to this weekly series, see the story on our News feed.