The Upper Zoom: Worship and Bible Study Guide for Week 1 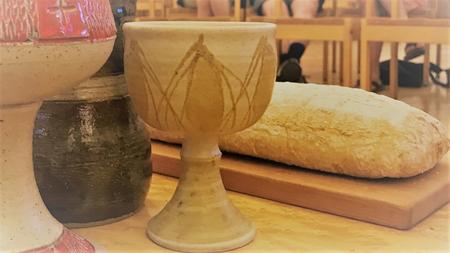 Current students, faculty, and staff are participating in a five-week, synchronous, socially-distanced Bible study and worship series called The Upper Zoom ©2020. Each week we will post the worship outline and Bible study that the Andover Newton Seminary community participated in the *previous* week. This way, our extended Andover Newton family, partner churches, and friends can lead their own weekly socially-distanced service.

Order of Worship by Sarah B. Drummond

Set the table: choose an activity for quiet centering, such as playing a song or lighting a candle.
Checking in: group members share how they’re doing, around 2 minutes each.
Bible study: show passage on the screen. Pose questions to stoke discussion. Discuss for 10-15 minutes. (Bible study is outlined below)
Prayer: Group leaders will have received prayer requests in an email by 5 p.m. Thursday. Also, the group leader might decide to write down prayers based on check-ins. Hold space for silence (3 minutes, give or take) after intercessory prayers. End with the Lord’s Prayer.
Ritual observance: Tenebrae: This celebration is common on Maundy Thursday, where a candle is put out for every one of the stations of the cross. One at a time, turn off all the lights in the room where you are except your screen. Display these words from Psalm 139:12 on your screen, and recite together:
Even the darkness is not dark to you. even the darkness is not dark to you;
the night is as bright as the day,
for darkness is as light to you.
Blessing: either the group leader can read, or can share the screen so all might recite, the traditional Emmaus (Pauline) blessing:
And now may the peace of God that passes all understanding keep your hearts and your minds in the knowledge and the love of God, and of God’s son Jesus Christ. And may the blessing of God almighty, who created you, redeemed you, and will forever sustain you, be with you now and remain with you all forever.
Passing the peace: Say goodbye with a word of peace, until next time.

91Later, as Jesus walked along he saw a man who had been blind from birth.
2 “Master, whose sin caused this man’s blindness,” asked the disciples,
“his own or his parents’?”
3“He was not born blind because of his own sin or that of his parents,” returned Jesus, “but to show the power of God at work in him.
4We must carry on the work of him who sent me while the daylight lasts.
Night is coming, when no one can work.
5I am the world’s light as long as I am in it.”
6Having said this,
he spat on the ground and made a sort of clay with the saliva.
This he applied to the man’s eyes
7and said, “Go and wash in the pool of Siloam.”
(Siloam means “one who has been sent”.)
So the man went off and washed and came home with his sight restored.
8His neighbors and the people who had often seen him before as a beggar remarked, “Isn’t this the man who used to sit and beg?”
9“Yes, that’s the one,” said some.
Others said, “No, but he’s very like him.”
But he himself said, “I’m the man all right!”
10“Then how was your blindness cured?” they asked.
11“The man called Jesus made some clay and smeared it on my eyes,” he replied,
“and then he said, ‘Go to Siloam and wash.’
So off I went and washed—and that’s how I got my sight!”
12“Where is he now?” they asked.
“I don’t know,” he returned.
********

Note the oh-so-human impulse to assign blame for suffering.

How do we avoid scapegoating (“the Chinese virus”) under physical and psychological stress? Do you find yourself struggling with judgmentalism? Are there circumstances in which judgment is warranted?

Note the polarity of Jesus’ vivid, embodied presence with the man contrasted with, at the story’s end, the mystery of not-knowing where to find Jesus.

How do we manage the strobe-light pulses of divine presence and absence, of light and dark?