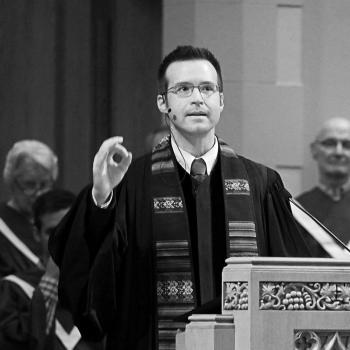 Ned Allyn Parker received his BA from Hampshire College, his MDiv from Andover Newton (’10), and his DMin from Seattle University. The title of his doctoral project was Preaching to Belong: The Practice of Narrative Preaching as an Indicator of Authenticity in the Postmodern Church.

He comes to Andover Newton at Yale Divinity School from Seattle, Washington, where he was one of the pastors at Seattle First Baptist Church in the downtown neighborhood of First Hill. During his time at SFBC, he worked to develop and foster a welcoming intergenerational community. Much of his focus in the congregation involved social justice and interfaith work.

Ned has been committed to nurturing the intersection of faith and higher education for many years. He was a residence director and multi-faith chaplain at Hampshire College and the University of Massachusetts. He also worked in student life at Andover Newton and was serving as the Associate Director of Recruiting, Student Services, and Retention at the time of his departure for Seattle in 2010. In this role, he performed outreach with churches and prospective students, while simultaneously developing space for community interaction around various issues.

Ned and his dog, Lucky, like adventures and long drives with the windows down.