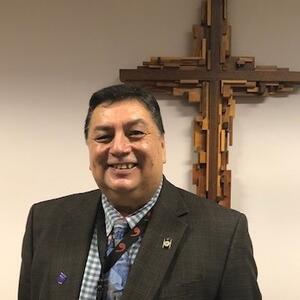 Roberto Ochoa (MDiv ‘17) works for the national office of the United Church of Christ as Program Associate for Congregations of Color and Ethnic Identified Congregations. Roberto completed his Master of Divinity from Andover Newton Theological School in 2017 with certificates in Ethics and Social Justice, as well as Spiritual and Pastoral Care. He grew up in Los Angeles and attended college in Minnesota before moving to Worcester, Massachusetts, where he served the Lakeview Congregational Church as a lay pastor for many years. He is married to his longtime partner James. He has been a member of the United Church of Christ for over twenty years. He is currently a Member in Discernment in the UCC.

What was your experience at Andover Newton and who were significant professors or mentors?
For me, being a Latino, it was important for me to have those that look like me. Those that were really significant were Professor Bob Pazmiño, Professor Benjamin Valentin, as well as Professor MT Dávila. Their presence really helped me through the process. For me, the professor who was outstanding was Dr. Adam Hearlson. He was my preaching professor as well as the coordinator of our worship services at Andover Newton. What I love about him is that as a young man, he was very innovative. From all the professors, he was probably one of those that was closest to our younger seminarians. But for the older students, he was able to remind us what it means to have the zest for worship, and the beauty and creativity of worship. And that’s my thing – worship. I was involved with the worship team because of my love of bringing worship into our communities… 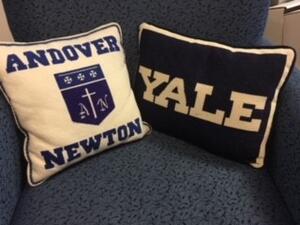 I was also offered a position in admissions in August of 2015. In September, the initial announcement was made about Andover Newton exploring partnership with Yale. That had an impact on us collectively. I think that the anxiety of what that transition was going to look like brought the faculty, students, and staff closer together. One thing that the professors really did well – all the professors at the time – was to help facilitate grieving cycles. Professor Gregory Mobley had a strength in his ability to challenge us to look at the promise of God, especially in the Hebrew Scriptures. He would let us to talk about it and would never dismiss our feelings or our anxiety. All of our professors and all of the staff at Andover Newton just stepped up to the plate and did above and beyond what they were called to do. They didn’t just teach what their discipline was. We became a community by learning how to say goodbye together.
Andover Newton has resurrected into something much more. I have a friend who started at Andover Newton and was able to finish at Yale. That relationship is still building between students who graduated from Andover Newton in Newton and Andover Newton at Yale. I think there was a lot of skepticism, but being a part of it over these past three years, I really think Andover Newton has found its niche, and that’s really exciting.
What is your current work and how did you get involved?
My work focuses on congregational assessment, support, and advancement. I get to share particularly with congregations of color, ethnic identified congregations, and rural congregations. So, my work deals with the health of congregations. We want to make sure that they have the resources and the ability to do the ministries in the communities where they’re located. 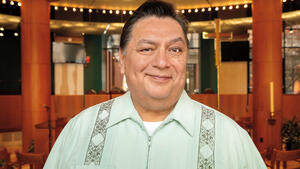 I have thirty years of lay ministerial experience, especially in cross-cultural ministries, working with communities of color – both in the Metropolitan Community Church and in the Presbyterian Church USA. I was a member of the latter on the West Coast. Then when I moved east, I discovered the United Church of Christ, and I’ve been a member of the UCC for twenty years. Throughout that whole time, I was involved with Latinx ministry, multi-cultural ministries, and interfaith relationships in the past thirty years. At the conclusion of my MDiv, when I was all ready to go enter the member in discernment process in the United Church of Christ, this brand-new position became available for Congregations of Color. I looked at it and it really called to me, and people brought it to my attention by various contexts. The only catch was that it required relocation to Cleveland, Ohio. And I’m married. We’ve been together for almost twenty-five years. His reaction was, “You should go for it.” We agreed, and we gave it two years that I would go to Cleveland by myself. He was preparing to move out to Cleveland with me when the pandemic hit, and that stopped all movement.
How has the work changed since the pandemic?
My job is travel about fifty percent of the time. I go and do a lot of listening tours for congregations. When we were grounded in March of 2020, I said, “If I’m going to be stuck in one place working from home, it’s going to be back in Worcester.” Because there was no way that I was going to take a risk of something happening. So, at that time, I had the occasion to come and work from Worcester. It was in September that I applied and received change of status from being in Cleveland to being a deployed staff – to work remotely. So that’s how I got back to Massachusetts. One thing that improved during the pandemic because I didn’t have to travel as much, was the explosion of zoom meetings and meeting a lot more people over the internet. It saved me from a lot of physical wear and tear. I’m grateful to be in this position. It’s been really successful so far. It’ll be three years in May.
What do you love most about your job?
I’ve been blessed to journey and be witness to the wealth of diversity within our denomination that is not too well known. Everyone knows that we do have African descended congregations and even Latinx congregations, but for me I also get to hear the stories and be present for our Hawaiian congregations, our Armenian congregations, our Hungarian and Romanian reform congregations, Samoan, Chinese. I oversee all that and also listen to the joys and successes of rural congregations. My role includes preaching, teaching, and participating in the sacrament of communion. My role is definitely pastoral in the sense that I’m called to be present and to affirm, and to see what we can do in partnership with the local jurisdictions in supporting congregations, especially in this past year. The majority of the United Church of Christ is made up of small and rural congregations of less than a hundred members. That’s sixty to seventy percent of our congregations.
What is the future going to look like for them post-pandemic?
These congregations were filled with anxiety as they were forced to make discoveries about worship new age of technology. And then, asking how to become a community? And how to reach out to one another? Then out of necessity they would become creative. I was also the pastor of a small church. We had to be creative to meet the needs of our community and our congregation with the resources we had. We did not have an endowment. We did not have staff. We had to depend on one another.
And so, to bring these stories to the forefront, especially to congregations that are not used to that, who are seeking, has been wonderful. The sense of, “Let’s hang in there together and find new creative ways to do church, and what does it mean to be church?” Because that’s my role. My role is asking the question, what is church? Throughout this process, since I work ecumenically, I have close contacts with the Evangelical Lutherans, the Presbyterian Church USA, the Episcopalians, the Methodists, the Disciples. So, for all our denominations, how do we struggle through in responding to the needs of our congregations? Their needs. What I think we should do is understand the realities of their needs.
How do you see the future of the church? 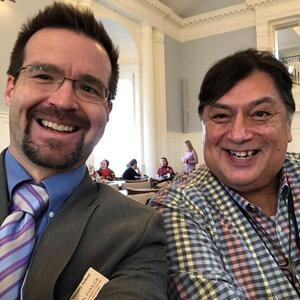 I am just so gratified by the energy of a generation who is willing to take on a mantle, through a changing reformation of what church is, who pushes back, and who challenges the status quo. I think right now many of our congregations are still controlled by those of us who were motivated maybe fifty years ago. We’ve forgotten to allow space for – I’m going to say it – new radical voices of what it means to be disciples of Christ, what it means to be church, what it means to be community. So, to witness the next generation gives me hope. I think that the narrative of the dying church has overshadowed the hope we have. Is the church really dying, or is it just turning into something different? If you look at ministries outside the mortar structure, where people are doing church in the community regarding climate, economic justice, global peace, as well as social and racial justice, we’re looking at church being redefined. We need to let go of those sentimental memories of a church building and a way of being church that became much more inward instead of outward. I’m encouraging alumni to come see what Andover Newton Seminary is doing to re-define church in New Haven.
Roberto writes regularly for the UCC’s Witness for Justice blog. You can read his most recent pieces by visiting the UCC WFJ website.
Additional NavigationClose