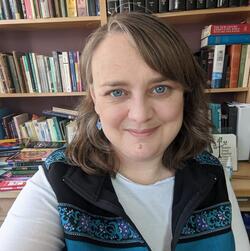 The Rev. Mindi Welton-Mitchell (MDiv ‘02) serves as the Senior Pastor of Queen Anne Baptist Church in Seattle, WA. Mindi comes from a family with several generations of pastors, she is an American Baptist who graduated from Andover Newton with a Master of Divinity in 2002. She is also a blogger and creative writer. Her first novel, Next of Kin, a science fiction retelling of the biblical story of Ruth, will release in 2021. Additionally, Mindi contributes to The Christian Citizen, a publication of The American Baptist Home Missions Societies. She lives with her husband JC and son AJ. AJ has a diagnosis of autism and has inspired Mindi to advocate for creative ministries within church spaces for those with disabilities. Mindi was interviewed by first-year Andover Newton student Oliver Mesmer, as part of Andover Newton’s Fridays with Alumni/ae series.

Can you talk a little about your spiritual background and call to ministry? 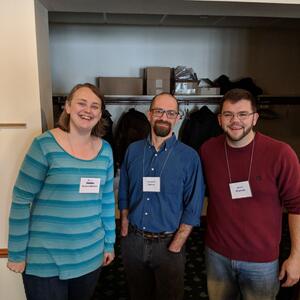 When I was thirteen, I felt the call to ministry in my grandfather’s church. He was an American Baptist pastor, and I was visiting him in Pennsylvania. I grew up in Alaska. Very early on, I felt that I was called to the same tradition as many of my family had been. I went to Linfield College and received a BA in Creative Writing because I love to write. Though, when I was there, I was fully intending to go to seminary. My grandfather went to Colgate Rochester [Divinity School], so there was a lot of pressure in the family for me to go to Colgate Rochester. My grandfather had a twin brother named Richard Withers who is class of 1957 at Andover Newton, so while I was thinking of Colgate Rochester, Andover Newton was also on my mind. After visiting both, I thought about it and prayed about it. After discernment, I was drawn to Andover Newton, so I started there in the fall of ‘99 and graduated in ’02.

Did you incorporate your passion for creative writing as a student at Andover Newton?

Yes! The seeds of my book were planted in seminary. There was a group of us that would stay up late in Sturtevant Hall playing Dungeons and Dragons and talking theology. It was a fun time! I remember one night… It was maybe four in the morning. I was thinking “I’d love to write the story of Ruth sometime as a space opera.” Someone else suggested the David story (which is going to be the sequel).
Also, Mark Heim is a science fiction guy, and in his Systematic Theology class, I wrote a science fiction story as my eschatology paper because he allowed us to explore theology through fiction writing. Some scenes of that are now in a different book I’ve been working on! So, the creative writing side was spurred on by Mark Hiem and Systematic Theology and, of course, studying Ruth and Hebrew Scripture with Gregory Mobley.
Did you have any other professors or experiences that were particularly impactful?
Well, I graduated in ’02. In ’03 came back and audited a couple of classes with Benjamin Valentin. His Film and Faith class was really fun. I also remember Christian Education classes with Bob Pazmiño. After I graduated, I had the opportunity to return and teach one of his classes when he had to be out of town. In terms of writing and inspiration, Kirk Jones continues to inspire me. I’ve often gone back to some of his books like Holy Play and Rest in the Storm. There was a lot of turning over at that time, but those were some of the professors I remember as being formative.
You met your husband at Andover Newton, too, is that right?
In ’03, Andover Newton hosted a prospective student weekend. My now husband, the Rev. JC Mitchell (MDiv ‘08), was visiting the school. The funny thing is that I did not remember meeting him at all, but he remembered me. When he came back to campus that fall, he tracked me down and we ended up dating a few months later. Then we got married at First Baptist, Weston and had our reception at Andover Newton. Several of the faculty came to our wedding, including Nick Carter, when he was president.
In your current ministry, how had your community responded to the COVID-19 pandemic? 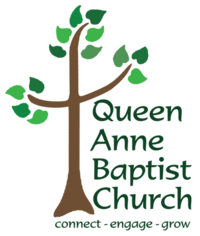 Seattle was the first hot spot in the US for Covid. We had the first big outbreak, and we had to move online very quickly. It worked for us. There was an understanding that this is what we had to do. The hard part was that there were elderly members who had a difficult time getting online. Staying connected with them and keeping them connected has been the hardest part. So, we just shifted online and changed our order of worship to make it shorter because of attention spans. We went to Facebook Live, and that has worked for us. There are people who have never set foot physically in our church but have joined in on our Bible studies and worship online. They have said, “I want to join this church!” and I think that’s fantastic.
What has it been like to be a leader during this time?
There have been some good things and some trying things. I feel the rhythm of church life has changed. Some of my colleagues record Sunday morning services. We’re still live, but it’s different because nobody is there. There are five of us in the sanctuary, and no one else. I’ve been learning to preach without getting that reaction, and that has been different. I think I’ve gotten used to it after a year. What has also changed is that there used to be so many things that followed worship, but now I feel like I’ve got my Sunday back. Sunday afternoon is now oriented toward more family time. 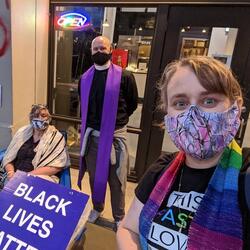 Preaching has also been much more relevant given where people are at. I feel strongly about encouraging people and being a voice of encouragement, especially for those who have been home. We have some medically vulnerable people who have not been able to go out. With this, the biggest time-shift has been toward more pastoral care, which is all on the phone or online or texting. For all of us in ministry, I think one of the hardest things is to remember to take your days off and take your vacation time even if you can’t go anywhere. This week, I did a little mini-retreat. We have a church camp nearby, and there’s a cabin that pastors can stay in for free. So, I went away for a couple of days just to sleep, to relax, and to write. While I was there, I finished writing a few lessons for Journeys, a Bible Study curriculum with Judson Press.
Is there anything that we didn’t get a chance to talk about that you’d like to include?
I have a son named AJ who is twelve and he is autistic. He is primarily nonverbal. It has been a challenge to parent and pastor and to make church more welcoming and inclusive of people with disabilities. We have noticed that different churches have different understandings of what’s acceptable. A lot of churches are not accessible for people with disabilities in that they aren’t intentionally welcomed to participate in their own way. Luckily, Queen Anne Baptist – from day one – was very welcoming of our son and his differences. That said, I have been in churches where people have told us that our son is misbehaving because they have a lack of understanding about autism. So, we are working on advocating for more acceptance and inclusion. One of the things that my husband JC and I did for a while was to start a church called “Open Gathering.” JC was the senior pastor, and the focus was on building an entire church that was inclusive of people with disabilities, including at the leadership level and all levels of the church community. Being accessible to people with disabilities is our “open and affirming.” Just how churches that are open and affirming run up the pride flag, we had a logo, which was a bunch of puzzle pieces that said: “You fit.” Unfortunately, for various reasons, things fell through and we ended up closing the church, but it’s still a part of our ministry – trying to make churches more accessible.
Additional NavigationClose